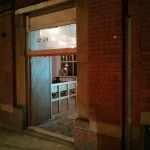 Look for the… well, actually there’s nothing to look for.

Your Questers are big fans of Brooklyn Brewery. In fact, when Emily was living in Brooklyn we visited on one of their legendary Friday night open house “happy hours”. Now they’re taking that concept on the road, and they’ve stopped in Leeds for just 6 weeks, open (bizarrely) Wednesday, Thursday, Saturday and Sunday in this hastily converted abandoned warehouse. 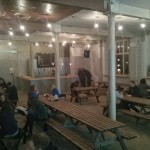 Pretty impressive for a hasty job!

They’ve managed to pull off the feel of the real Brooklyn Brewery perfectly, with everything made out of whatever was available, beer tokens instead of a cash bar, and specially labelled keg taps for each beer. There’s no sign on the door and you could easily miss the boarded-up building if you didn’t know where to look. 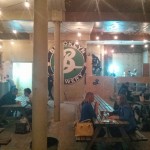 The bar has 8 kegs, and over the 6 weeks they’ll have 25 different Brooklyn beers on, so there will be plenty to bring people back for repeat visits. Even though we’re big fans we managed to find beers we’d never had, including the Sorachi Ace extra IPA and a saison called Cuvée La Boîte.

Food is provided by Red’s True Barbecue, and the amazing smell of barbecue pork permeates every inch of this place — it may not be the best place for a vegetarian! There’s also a merchandise stall selling all kinds of Brooklyn apparel and their large sharing bottles to take away. 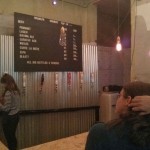 Beers are all the same price (1 beer is £4.50, or 5 for £20), but different strength beers come in different sized glasses. Quite a neat system, really, and I’d like to see more bars try to sell beer this way!

The clientèle is about 60% hipster, which is a much lower percentage than the real brewery! So you should feel at home here whether you have the glasses and moustache or not. 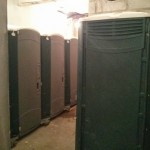 Like being at a festival. And not a beer festival.

Downstairs the toilets are all portaloos. Not for the faint-hearted!

We’re not really sure if this belongs in the Quest because we know it will be gone in a few weeks. But it will probably have the dubious honour of being the highest-rated closed bar on our list!