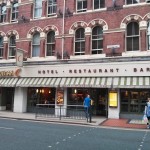 The exterior has an exciting continental feel.

You can’t miss the Cosmopolitan — it is a huge place right in the heart of Leeds’s traditional nightlife area. It is primarily a hotel but the bar makes some effort to attract locals and so it is a viable target for the Quest.

The public space is very large, with drinking-only space to the left and the restaurant to the right. The decor is modern and bright and unnaturally clean… If you can find a speck of dust here I’ll be amazed. It’s pretty boring, though… quite hotel-like, which is probably not surprising given that it’s a hotel. 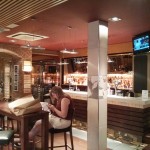 The bar area is hotel-like.

The bar specializes in classic cocktails, including three types of … you guessed it … Cosmopolitans. The beer selection is limited to a couple of boring kegs and a handful of OK bottles including Tiger, Cobra and Cusqueña. The prices aren’t great — more or less what you’d expect from a hotel.

Considering its proximity to Leeds’s main LGBT bars, I’m surprised they don’t try harder to attract some of the overspill from those crowded bars, but it actually feels slightly like they’re trying to distance themselves from the gay scene (take a look at their website and see if you got the same feeling). 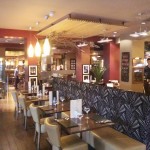 The restaurant area is hotel-like.

I digress. Really I’m looking for anything else to say about this distinctly average place. If you found yourself here because of some event it’s just fine but I’d say don’t make the trip here especially when there are so many better places nearby.