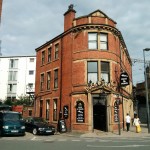 Looks small on the outside…

Like The Grove, The Duck & Drake was a place we’d heard many good things about before starting the quest, but we had never ventured inside before now. That’s not the only thing the two pubs have in common, either. 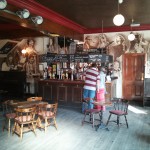 …but inside is another story!

The Duck & Drake is most well known as a live music venue, and they take this very seriously indeed. Everything about the place from the classic gig photos to the merchandise to the amazing plant piano in the garden lets you know instantly you’re inside a music venue. If you can imagine what a Victorian Yorkshire pub would feel like if it was involved in a spacetime accident with a Tennessee music club, you’re probably not far away. 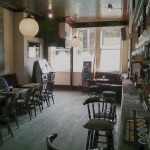 Not much to say about the back room. It’s in the back.

It’s also much, much bigger inside than we were expecting. The front room is massive and spacious — presumably leaving lots of room for audiences — and there’s a smaller back room (with a cash machine and arcade game) as well as a huge walled beer terrace where most of the clientèle were on the sunny day we visited. 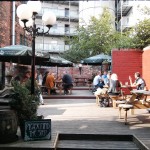 The beer terrace almost feels like a well kept secret!

The real ale selection is extraordinary. We counted fifteen cask ales — 5 regulars and 10 guests — mostly from local breweries (the furthest afield was Derbyshire) including some of our favourites (Roosters, Saltaire, Great Heck). You’re not going to find any beers that are too adventurous here, but on the other hand that means you’re not limited to one pale ale, one best and one stout to choose from. The landlord was friendly and very knowledgable about ale, which is always important when there’s a lot of choice! There’s no fridge and the keg selection is nothing to shout about (Carling, Guinness, etc.) but, y’know, there are 15 casks! 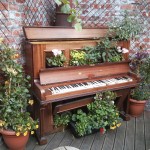 This is my favourite pub feature yet. Brilliant!

The food offering is just pork pies with mushy peas, but if that’s your thing you can get a meal for £2.95, which should give you plenty of change for another pint.

Like The Grove, this is an unpretentious local pub for people who like cask ale and live music, and it does a very good job at what it is. Visit on a sunny day for maximum effect!