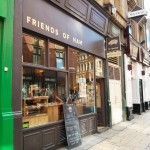 Look for the dead pig in the window. I promise it’s the only one on this street.

We’ve been saving Friends of Ham for a special occasion, and this is it. You’re reading Leeds Beer Quest’s 100th review!

Friends of Ham describes itself as a bar + charcuterie, and this is immediately evident by the chunks of dead animal hanging in the window. They pride themselves on providing only the best in cured meat, cheese, wine and craft beer. 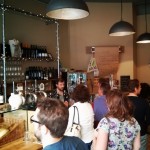 I don’t know much about the other three, but their beer selection is amazing. You get a smaller choice than somewhere like North Bar, but it’s not the worse for it. There are 3 casks, 6 kegs and a carefully stocked fridge that’s organized by beer style. Not one of them is average or permanent — you’re looking at a showcase of the best craft brewers from the UK and around the world. Every single time we’ve been in there we’ve wanted to try pretty much everything on the bar and beyond (if only we could). The staff are all very knowledgable and are happy to help you decide if you become too overwhelmed! 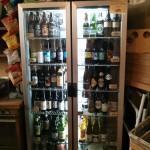 Friends of Ham are also friends of brewers, and every so often they have an amazing ticketed meet the brewer event with a favourite brewery (they’ve had Magic Rock, The Kernel and Wild Beer Co so far). This is a chance to try many unusual beers in a night and to actually meet and talk to the people behind them.

The food here is also amazing, but don’t come for a full meal. These are small cold meat + cheese dishes for complementing your drink. Surprisingly for the name, there are a lot of vegetarian options! 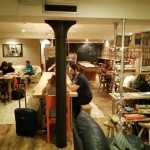 Downstairs there is a lot more space to enjoy your beer & cured pig-meat.

The atmosphere is bright and open, despite the relatively small space. There are many different kinds of seating, including sofas and a giant communal table in the middle. When it’s busy expect to sit on an uncomfortable bar stool, though (which are numerous)! There are books (mostly about ham, cheese, beer and wine) and games here, including a vintage shuffleboard at the back. Due to its proximity to the station and its fame, there are inevitably a handful of loud suited types in here at very busy times but all the rest of the time it is a chilled out place that attracts mostly people who are prepared to pay a little extra for the quality of the beer and food. 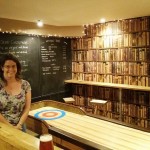 We’re not the first people to review Friends of Ham, of course, but we agree with what everyone else has said. This is a great addition to a city that really cares about great beer and the independent spirit, and in a year it has already become part of the furniture. Long live the pig!