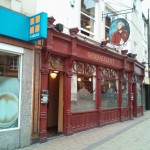 Another discovery by your faithful Questers: General Eliott is a Sam Smith’s pub! We didn’t know this, because we’d never been in before. It belongs to a series of pubs including The Three Legs, The Duncan and The Regent which we were apprehensive about visiting, mostly for fear of sticking out like sore thumbs.

We definitely did look out of place, but were nonetheless greeted with a warm welcome and were delighted to an extensive Sam Smith’s range on keg, including stout! Like all members of the chain, it’s Sam Smith’s and Sam Smith’s only, right down to their brand of crisps. So if that’s not your speed, best to skip this one. The value is just right, though. Rich got a few sideways glances when he handed over two fivers for two pints, thinking that one wouldn’t cover it. (It did, with change to spare.) 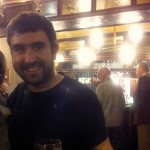 The space is not much bigger than this picture suggests.

The layout is no-frills — just a small square pub with the bar in a corner. It has two entrances, despite being about the size of a living room. There’s a fruit machine, but nothing else in the way of amenities. (In fact it’s one of the few of our quest not to get a single tag.) We refrained from taking any obvious pictures of the space as we were feeling conspicuous enough already but hopefully you get the idea. There’s not much seating and it does get really crowded during busy times.

So in conclusion, we were expecting the General Eliott to be much more of a scary dive than it was. Don’t get me wrong — it is a dive, but friendly enough and the cheapest good beer you’ll find in this part of town. I’m glad that this place continues to thrive; we can’t let the hipsters take over everything.