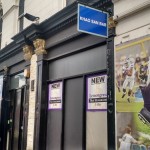 The frontage with its unassuming logo.

We’d seen this place take over from the very shortlived Lemongrass restaurant in the ground floor of this former strip club that also houses Henleys upstairs. It’s definitely marketing itself as a bar so it needed to be visited by your Questers. 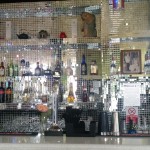 The bar. That’s a lot of shiny.

I’m not sure Khao San Bar knows what it is meant to be. Amazingly it still retains most of the strip club décor including a weird stage area and banquette seating all around the outside. Music was being played very loud (even though we were the only people there) from a free advert-filled Spotify account alongside loud feedback buzzing. And, most telling of all, they couldn’t give a straight answer to the question “do you serve food?”, although menus were provided and we were told that “some” of the menu was available. 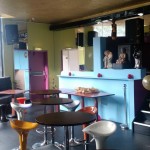 The whole place looks like this. What is this place?

Beer choices are extremely limited. Chang and Singha in bottles and Singha on tap. A Chang and a half of Singha cost us £5.20 which isn’t exorbitant. Mostly this place seems to serve cocktails and “cool shots” from bottles.

The Facebook page indicates that they stay open till 3am on weekends so maybe they’re hoping for dancing and a party atmosphere but it’s hard to imagine such a place really taking off.

This was definitely one of the weirdest places we’ve visited so far. And it seems very unlikely we’ll be back.