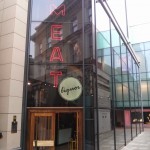 What does the name mean? How many puns does it contain?

Hipster burger bars are obviously a fad right now, and London’s MEATliquor is getting on the bandwagon with its new place on Trinity’s neglected Bank Street (check out the amazing gates at the bottom of this street on your way). 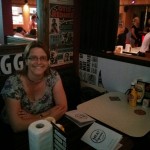 Emily in one of the downstairs booths.

MEATliquor has a full restaurant downstairs that doubles up as the “main bar” and then a smaller “shop-window bar” at ground level. The full menu is available at both but the vibe is very different: upstairs is all about cocktails and bar snacks, downstairs is about the burgers. 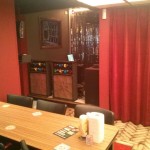 Downstairs is huge but it was also packed so we snapped this picture without people in it.

The beer selection isn’t bad: on keg there’s Budvar, Hopf Weiss, Longhammer and a guest Magic Rock (High Wire when we visited). We’re massive Magic Rock fans so it gets an extra beer star just for that. In bottles/cans there’s 13 Guns, Hobo Lager, Estrella, Paulaner and Vedett. There aren’t any taps upstairs (they need room for six cocktail slush machines) but they might fetch you a High Wire from downstairs if you ask nicely. Keg prices are quoted in bizarre measurements of ⅔pt/2pt/3pt although we were assured you could order a single pint if you wanted. 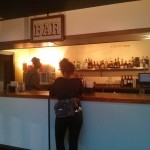 Apart from the meat, this place is definitely about the liquor (the clue’s in the name), so it’s probably more appealing to cocktail-lovers than beer lovers even though we weren’t limited to a handful of crap lagers. There’s also some sort of DJ area which suggests they might turn into more of a club later on and even a dartboard in one of the booths (although I bet they’d be surprised if you tried to use it). Upstairs there’s also a photo booth… are photo booths the new ping-pong? 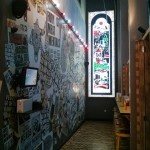 Décor is meat themed (I particularly liked the gig adverts for Otis Redmeat) and, like most hipster establishments, there’s a small dash of trendy misogyny and vegetarian-bashing about the menu but you can’t really avoid that at any burger bar at the moment, sadly. 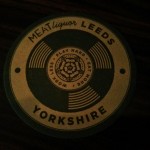 Yorkshire! They have at least attempted to blend in.

One final thing: during September they have a dice promotion where you can roll a die with your bill for the chance at a discount. We got our whole meal (including the Magic Rock) for nowt! 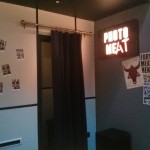 Selfies are so hot right now.

I don’t think MEATLiquor is anything particularly special, but with the weight of Trinity behind it coupled with its location and late licence, I expect it will do very well. And I’m sure we’ll be back if we need a burger at midnight.