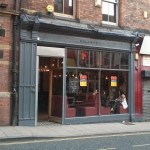 The former Hobgoblin Music shop has been converted well to a bar.

Call Lane isn’t exactly known for the kinds of bars your Questers like to frequent. All too often they are too trendy for us and they expect beer drinkers to be happy with a choice of two. So you can imagine we were not in a hurry to get to Call Lane’s newest bar, Roland’s.

Well, it turns out we were misguided. Roland’s is not like other bars on Call Lane. 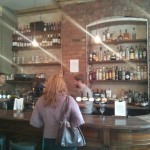 Emily has a difficult decision ahead.

Walking in, the bar area is a spacious room decorated like someone’s house. There aren’t many seats inside, presumably because Call Lane is a “standing room only” kind of place on weekend evenings. At the back there’s a very reasonable-sized walled beer terrace: something of a rarity in this part of town! 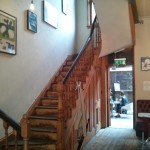 The beer selection is pretty good: 3 casks (2 were on when we visited, Magic Rock Carnival & Rooster’s Yankee) and 10 kegs (including one cider) featuring amongst others a house beer (from Wharfebank), Jaipur, Doggie Style and 2 beers from Portland Maine Brewery, which we’ve never seen anywhere else. In the fridge my attention was immediately drawn to three different varieties of Einstök as well as favourites like Punk IPA & Goose Island and rarities like Asahi Black & banana Mongozo. Prices are pretty good, really, with nothing costing more than £5. 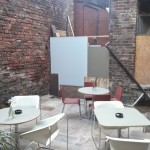 Part of the beer garden. An extreme rarity on Call Lane!

As well as beer, there’s freshly ground coffee and something called pizza fritta (fried pizza) which is apparently a traditional Neapolitan street food. We’ll try this next time we’re in, for sure!

There’s not much else to say about Roland’s except that we enjoyed our visit. The staff were friendly, the beer garden was a great touch and the beer selection sealed the deal. It’s not going to be top of our list (especially when Call Lane is heaving) but it’s certainly our favourite bar on this street!