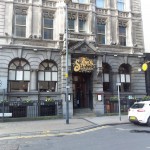 The Pearl Assurance building. You’re assured of a pint whichever side you enter.

Considering it occupies the back of the same grand building as Mr Foley’s, Sam’s is a relatively unknown place. It’s an offshoot of its kin in Manchester, which are genuine Victorian ale and food houses. This one is in a Victorian building that hasn’t always been a pub but the owners have put in a valiant effort to make it look like it has. It certainly doesn’t fit in with the rest of the Greek Street area bars, which might contribute to its relative obscurity.

The emphasis here is definitely on the food, which is a very nice small menu of British dishes. That means meat, meat and more meat. Even the two vegetarian options are traditionally meat dishes (cottage pie and black pudding). The food is very nice and not too expensive, and the service was very quick and friendly. And the home-made ice cream selection is especially interesting, including a lager & lime sorbet amongst other unusual flavours! 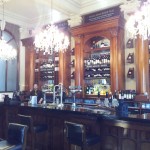 The bar. Posh-looking but surprisingly relaxed.

Enough about food, though. This is a beer blog! The beer selection here is modest but OK. When we went there were two ales from Rudgate Brewery as well as the house bitter which is mysteriously called “Sam’s Special”. They also have a “Sam’s Lager” alongside the usual rubbish on keg and Saint lager in the fridge. The beers are about £3.40 a pint which is not cheap but pretty normal. There’s also a big wine list and every Friday is “Gin Friday” with offers on gin. 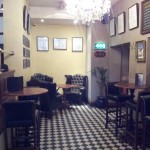 This is the drinking lounge. The rest of the pub is dining area.

The space is divided into dining and bar/lounge areas. The bar/lounge area is sizeable but doesn’t have too many places to sit. There’s also live music from the Leeds City Stompers on one Friday a month and Jazz on Sundays. It’s not clear where these bands set up.

There’s not much else to say about Sam’s. It’s definitely a good place to go if you want a nice slab of meat with a pint of real ale, but there’s probably not much to tempt the casual drinker.