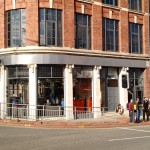 Crispin House is hard to miss. Look for the giant building with the dome.

ShuffleDog has been anticipated a long time by your Questers. Even before we knew BrewDog were taking it over, we looked at this vacant space in the beautiful Crispin House and thought “that would make a great bar”.

This is the second BrewDog bar in Leeds, and it is trying very hard to be different from its cousin. There are two very different floors: 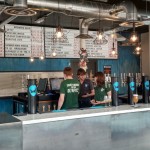 Yes, those really are all on tap!

Upstairs is a sunny window-filled keg bar with no less than thirty-five beer lines and one cider. About half of them are BrewDog and the rest are guests. Most of the beers are strong (at least 6%) although we were very pleased to see Nanny State – our favourite non-alcoholic beer – on tap. Prices are high but you do get what you pay for! 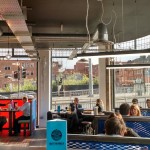 Downstairs is the shuffleboard basement, with three full-size shuffleboard tables and three classic pinball machines (I’m informed that The Addams Family is one of the best). There are a few tables dotted around down here and it’s cool and relaxing compared with the heat and bustle of upstairs. 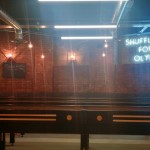 There’s table service everywhere (and beer menus!) so you don’t need to keep running up and down the stairs. And in a few weeks there will be a full food menu too (currently it’s just meat and cheese platters).

It’s really nice to see a new BrewDog in town: the first one definitely felt too small for a city like Leeds and this is more like what we’ve come to expect from BrewDog in other cities. And it’s a testament to how awesome Leeds’s culture is that BrewDog choose here as the place to innovate with this new bar concept.