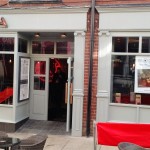 Soba is a chain of bar/Asian street food restaurants in Scotland and, naturally, when they thought of opening south of the border our beloved Leeds was the first place they came to. 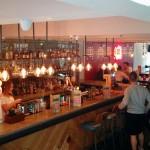 The bar has opened upstairs from The Pit in the Grand Arcade, in the greenhouse-like space previously occupied by Handpicked Hall (RIP). If you go upstairs in this bar on a sunny day, as we did, you can expect to roast! But it is nice to have some light in a bar for a change, and it feels very open and sunny. It looks like this upstairs place turns into more of a club with a DJ and dance floor in the evenings, and it might be fun to go dancing in broad daylight up here in the middle of summer. The whole space is vast: its previous incarnation was an entire shopping centre and they’ve turned it all over to this bar so you can expect to find somewhere to sit. 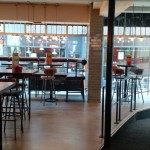 The street food (mostly Japanese and south-east Asian) and cocktails are the specialities but of course we were here for the beer. On keg they had Dogfish Head DNA, Sam Adams, Estrella, Blue Moon, Asahi and Cobra and a few more interesting beers in the fridge including 2x Brooklyn, 2x Anchor, Hitachino, Singha etc. Nothing you wouldn’t find elsewhere but still nice to see in a bar which isn’t specializing in beer. Sadly the prices were really steep, we thought, even for Merrion Street. 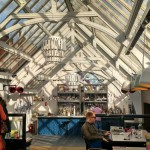 All greenhouse all the time in the upstairs bar.

The décor is your usual Merrion Street stuff with graffiti and neon everywhere. When we visited the crowd was extremely mixed and it soon filled up at dinner time, which is a good sign for its survival even with giant bars either side of it. There are a lot of staff and they were very friendly, even when I spilled my beer all over the cash register… oops. 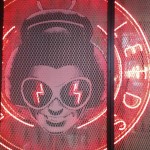 Neon. But of course.

The cocktail bar / street food café / nightclub / greenhouse thing about this bar left us thinking we aren’t really sure what it is or what its niche is, but it’s a formula that’s worked very well in Scotland and I can expect it will do the same down here.