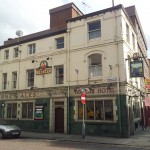 The Templar is a great historic building in a very un-historic part of town.

The Templar is a bit of a Leeds legend. We’ve been hearing about this place for ages, especially from the Camra lot, so it’s about time we checked it out.

This top part of Vicar Lane is not pretty, so this beautiful early-20th-century tiled pub really stands out amongst the boring postwar buildings on both sides. And it’s got great fittings inside: wood panelling everywhere, booths, stained glass and the original bar. They’re all very well maintained, but the atmosphere still leaves a lot to be desired. We visited when there was a big football match on, and the place was packed with football fans watching the zillions of screens dotted around the place. The barman was notably unfriendly and the experience was rounded off by the strong smell of the gents’ toilets which are situated right by the bar. 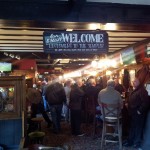 Packed to the rafters with sports fans!

The beer is the draw here for many people, and it’s a decent selection of real ales. There are 7 guests in addition to Tetley’s Cask, three of which were from the excellent Copper Dragon brewery when we visited. The beer is kept and served properly, and it’s very reasonably priced. Apart from cask beers there’s nothing tempting here: John Smith’s keg, Guinness and a handful of boring lagers.

We don’t really have much else to say about this place. The football probably caused us to dislike it slightly unfairly, but even without that there would be little to draw us here. If you want a good, well kept pint of cask beer then it’s probably the best selection in the vicinity, but you don’t have to go very far to find better, and in much nicer surroundings.