This Trinity bar has expanded its empire to a long-empty venue on Greek Street.

Every now and then, a new bar opens up in Leeds that confounds our low expectations. The Greek Street branch of The Alchemist is not one of those bars. 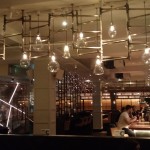 The one in Trinity was just ok when we reviewed it back in April 2013, so when we heard a new one was opening down one of our least favourite streets in Leeds, we yawned and suited up to go visit. For the good of the Quest, we told ourselves! 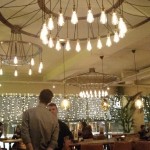 The sparkliness makes for a pleasant enough atmosphere.

It’s absolutely not targeted at us, as we’re not people who get excited about weird and gimmicky cocktails. The ingredients and mixology match the decor, which we’ll call “science lab chic.” Dry ice, oak smoke, white chocolate foam, a blackcurrant bubble, are just some of the things you’ll see here.

If anybody can make the case that adding dry ice to a drink actually makes it taste good, please get in touch!

Couldn’t get excited about the beer, so it was a Choco Coffee Crunch for me.

Behind the bubbling and foaming and the volumetric flasks you’ll see… oh wait, no you won’t. They don’t have their beers on display nor do they have labels on their taps, so you’ll have to ask about the selection. There’s Guinness, Stella, Heineken on tap plus mostly boring bottles. The bright spot is Peroni’s Gran Reserva, a nice drinking beer if you’re willing to drop £5 on it. 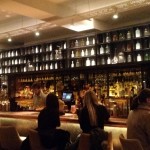 One half of the space is a restaurant, offering up what might be called “everything fusion,” including American pancakes, Thai fish cakes, Japanese ramen, jerk chicken, fajitas, and fish’n’chips. I was expecting to see some dry ice nachos or sausage and mash served in a beaker but no such luck.

It seems to be already quite popular, even on a Wednesday night. It fits in well on this block and will most certainly thrive with or without our endorsement. Any guesses as to whether it’s going to get it?