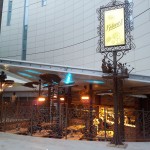 Squeezed in behind the church, The Botanist somehow finds plenty of space.

The big news in Leeds recently is our posh new shopping centre Trinity. It brings with it a couple of new places, and your intrepid questers couldn’t wait to review them.

The Botanist is cleverly concealed behind Holy Trinity Church on Boar Lane, although its seclusion doesn’t seem to have hurt its popularity — when we first tried to go on a Saturday night it was completely rammed but it was much more manageable on the Sunday when we visited again. 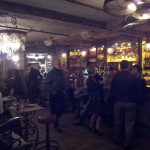 The bar area. Not too busy on a Sunday night.

The décor here is very inventive: the whole place has a “garden shed” motif, with forks hanging from the walls, stacks of plant pots and peeling paint — taking shabby chic to its limits. There’s also a large beer garden that is nicely divided into smoking and non-smoking areas, and the kitchen faces directly onto the beer garden so you can see everything the chefs are doing as you approach the entrance: an interesting idea that seems to work quite well.

Talking of the food, there’s a varied menu of modern pub food, including a “special” for each day of the week, which on Sundays is full roast dinners. In the food area there’s table service for both food and drinks. 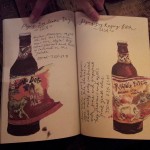 But we’re here to review the beer, and this was a big surprise to us! On tap they have 4 real ales (served cryptically from what appear to be casks containing two kinds of beer, but what are in fact just faces on the real casks behind) plus Hoegaarden and Samuel Adams, and you can get these in flights with three different ⅓-pints for the price of a pint.

To us, though, the really interesting thing is the bottle menu! There are 69 different bottled beers & ciders on offer, including some real specialities: 4 different Flying Dog beers, 3 from Redwillow, an Einstök and a Marble I’d never seen before and BrewDog’s Tactical Nuclear Penguin (as well as Punk IPA, of course) and lots of other British, American and Belgian beers (hello, Rochefort 8). The menu is presented as though it’s a botanist’s almanac and is quite beautiful in itself. The Botanist could have really skimped on the beer selection and still been popular so it’s really great to see them taking no compromises on it! 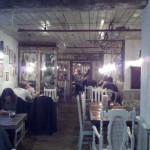 The piped music is pretty loud and very bland, but it’s not so bad you can’t hear each other speak at normal volumes. They have live music later every night too.

It’s hard to escape the reality that this is a big-money business and part of a chain, but The Botanist achieves it better than we’ve seen anywhere else. A unique look, great food and an awesome beer selection all add up to a place we’d definitely like to go back to.