Home » Bar reviews » The Brotherhood of Pursuits and Pastimes

The Brotherhood of Pursuits and Pastimes 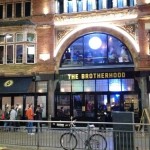 I guess they couldn’t fit their full title on the frontage.

Remember when I said that Henleys is the only sports bar in this part of town? Well, I spoke too soon, for The Brotherhood of Pursuits and Pastimes has officially opened (and it probably qualifies for the bar in town with the longest name).  They’ve paid attention to detail and are definitely trying to offer a more upscale experience than the other sports joints in Leeds. 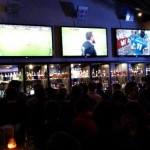 The bar is in there somewhere.

To get the full experience, we (unwittingly) ventured here during a Manchester United v. Arsenal match, which is apparently something that will draw a crowd. You couldn’t not watch the game when it’s on; the size, number and volume of TV screens is simply unavoidable and we were the only people there who weren’t glued to the action.

Though it was completely packed, we were able to find adequate space to perch ourselves on the sizable mezzanine level (which also offers a nice view of Briggate out the impressive bay window). There’s a bar up here, too, so you won’t have to travel far too get peruse the beers. 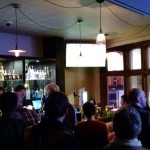 The upstairs bar. No shortage of TVs up here either.

Ilkley has a corner on the interesting choices here, with Gold and Joshua Jane on cask, bottled Siberia, and a venue-specific “pale ale” called Brothers’ Oath, both from a keg and a bottle. (We’d call it just a run-of-the-mill lager, and the fact that they’re charging £4.40 for a 330ml bottle of a 3.9% local beer didn’t help endear it to us.) There’s also Lawn Mower and B17 in cans, which you don’t see everywhere. 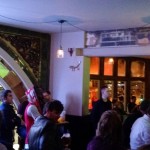 A glimpse out onto Briggate.

If you’re hungry, there’s a range of interesting pies or some classy bar snacks to choose from. But given that the beer is only so-so and being crushed by televised sport is not our idea of a good evening, we probably won’t come back to try them. That said, they’ve done a good job reaching their target audience and there’s no doubt this place will handily blow its competition out of the water.