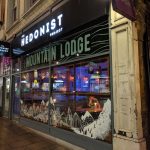 Finished hitting the slopes? Drop in here for a cosy refreshment.

Now that the weather’s turned cold and the days are shortening, the Hedonist Project has traded in surfboards for snowboards, transforming Trader Dan’s Surf Shack into The Mountain Lodge for the season. 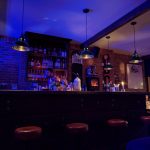 Get warm by the (fake) fire.

In line with the brand, a fake fire roars (read: flickers) behind the bar. A fake window looks out onto a fake mountain. A fake slope map adorns the large wall. The kitschy atmosphere hits its target; if you agree to suspend your disbelief, you could almost feel like you’re in the middle of a Colorado ski resort. 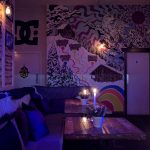 Plan your next ascent. 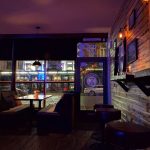 Out the fake window is a snow capped mountain. Out the real window is… Lower Briggate.

Friendly bar staff who know their stuff when it comes to cocktails add to the perfectly pleasant atmosphere of the Lodge. It’s fine, but just can’t bring ourselves to care that much about this project, despite identifying as proud hedonists.

If you need us, we’ll be somewhere that actually… you know… serves good beer.