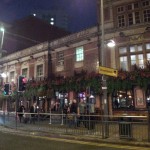 The Scarbrough Hotel (the spelling is correct — the place is named for Henry Scarbrough) is affectionately known by locals as “The Scabby Taps”. And how appropriate a moniker that is. It has taps: lots of them. And it’s a bit grubby.

Like all of the Nicholson’s chain, they take real ale seriously. They have 7 or 8 interesting and varied real ales on (and one real cider), including their own brand “Nicholson’s Pale Ale”. There was also Sierra Nevada in the fridge for people with a craft beer craving. On the board behind the bar there is a count of how much real ale they’ve sold this week and an opportunity to vote for next week’s guest ale!

The food menu is pretty substantial and both food and beer prices are very reasonable indeed. Of course, reasonable prices mean big crowds and lots of noise. Due to the proximity of the station, this is a popular venue for Leeds United fans and also for stag and hen parties, so beware! 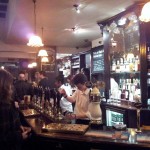 Lots of ales to choose from!

There’s also a little beer garden outside, but it faces directly onto Neville Street — the main entrance into the city from the motorway — so it’s not very pleasant.

Decoration inside is partly preserved from its original Victorian fittings, which is both a good thing and a bad thing. The whole place feels a little bit dirty but nowhere near as bad as some places we’ve seen (Yates’s).

The Scarbrough is trying to cater to real ale lovers, and succeeds at this. We really liked it. Unfortunately, so did everyone else in Leeds, real ale lovers or not.