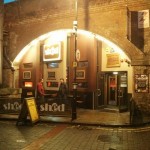 It’s an arch. With a beer garden.

The Shed is found hiding on a side street between Lower Briggate and the station, near the giant Mission club. True to its name, the bar itself is indeed made out of planks. It’s actually in a railway arch and the sound of trains passing over adds to the ambience.

The raison d’être of The Shed is indie music and this is immediately apparent even without stepping inside. Since this is my favourite genre of music I felt instantly at home with the soundtrack and the many indie items hanging on the walls. They like to stay current, too, and the website lists their current top 10 songs which includes a good mix of old and new. It would be nice to be able to request songs here (or request them not to play Coldplay) but we didn’t see evidence that this is something they do. 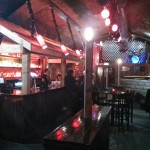 The beer selection here is much better than we expect from music-themed venues. Asahi and Sam Adams (coming soon) on keg, and bottles including Goose Island Honker’s & Pale Ales, Blue Moon and Pacifico. There’s also a very impressive selection of single malt whiskies and some cocktails. No food, though.

The Shed seems to be welcoming to all, and we saw a good mix of different kinds of people here. We’re often stuck for somewhere welcoming with good beer when it’s late at night or a weekend so we’re very happy The Shed exists and we’ll be coming back!