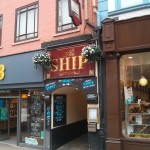 The historic entrance on Briggate.

The Ship is one of a handful of old pubs occupying space between Briggate and Lands Lane, along with The Pack Horse, Whitelock’s, and The Angel. I’ll be honest — before the Quest they all seemed pretty interchangeable in my head but I have learned this is not the case. The Ship is charming enough, but certainly the least interesting of the ones we’ve reviewed so far. 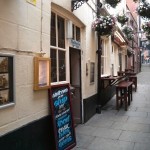 A few tables and chairs sit out in this narrow beer garden.

They offer six casks of good ale, but nothing particularly unusual: Black Sheep Bitter, Three Swords, Leeds Pale, Hobgoblin, Timothy Taylor and Copper Dragon. They’re kept and served well, as real ale is certainly the focus here and they wouldn’t want to risk losing their Cask Marque. The sign outside also promises “world and craft beers” but the only bottles even worth mentioning were Tiger, Singha, and Tyskie. World, sure, but craft? Might be a bit of an oversell.

Stick with a pint. You’re not going to find much of interest in the fridge.

The Ship is smaller than the other Briggate pubs, with just the bar area on ground level and a dining area up a couple of steps. The lower deck and upper deck, perhaps? They have a beer garden outside but it’s also on the small side. As you might expect, you’ll see lots of ship-related paraphernalia and the overall nature is warm and welcoming. It’s a place for regulars but new visitors won’t feel out of place while enjoying their pint or a plate of traditional pub food. 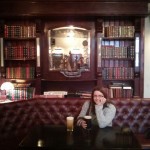 Reader’s Digest publication or Risk, anyone?

We enjoyed our trip aboard The Ship just fine, but there’s just not enough unique draw to keep us coming back. Not in a place like Leeds, anyway.