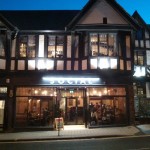 Parts of this building go back to the 18th century, apparently!

One of the greatest things about this city is the legendary Brudenell Social Club in Hyde Park, but of course it’s outside our Quest area. So imagine how excited we were to discover that a new bar had opened in the city centre as a collaboration between the Brudenell and Sela. I’ll tell you: we were pretty damned excited. 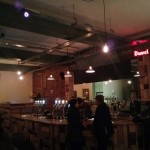 The bar. And is that a giant Lego head in the corner? It is!

The Social occupies the ground floor of Nash’s, replacing Sedgwick Ave which opened and closed before we could even review it. The inside is not small but it has very few tables. On a quiet night this made the atmosphere very comfortable indeed although I’m not sure how it will be when it’s really busy. The décor is eclectic, with exposed brickwork and lightbulbs, various retro beer posters, a piano, a table football table and… er… several giant Lego heads. 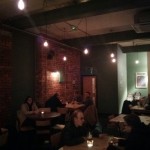 This gives you an idea of how spacious and relaxed The Social is.

The two parent venues have great taste in beer and this is reflected at The Social: There are 2 local casks (apparently always £2.90 each) and 8 kegs (including 1 cider). The kegs include the Kirkstall Framboise and a house “session lager” which Emily tells me was very poor, but never mind. The real joys are in the fridge: beers from Sierra Nevada, Stevens Point, Thornbridge, Great Heck, Odell, Brooklyn, Duvell and Sam Smith’s. And amazingly for this part of town they’re not even going to break the bank. 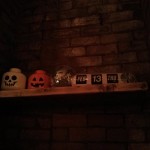 Food comes in the form of stew-of-the-day and bread at £3.50 a go, which seemed quite reasonable. And music is obviously a big deal here: I heard a dozen tracks from some of my favourite indie albums of the last 10 years while we were reviewing it.

Social is a welcome addition to this part of Leeds. Anywhere that sells good beer at good prices is going to get our vote, but when it’s somewhere that’s this nice it gets into top-10 territory.