The Tetley Bar and Kitchen 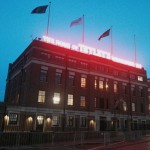 The Tetley shines like a beacon. You really can’t miss it.

At its height in the 1980s, The Tetley Brewery was the world’s largest cask ale producer. Though the brewery itself was demolished in 2012, the headquarters building remains and has been taken over by PSL (formerly of Whitehall Waterfront) to be turned into a contemporary art space, bar and restaurant. All the revenue from the food and drink goes back into supporting the art space, which makes it one of two not-for-profit venues we’ve reviewed (the other being Wharf Chambers). 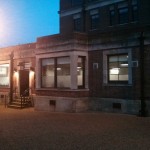 The bar area still very much has a feel of being a brewery: big open spaces, concrete floors, and furniture left over from when it was still in operation. I found the atmosphere just a tad on the sterile side, but still pleasant enough, and there was definitely plenty of comfortable seating. It’s a bit original-art-deco-meets-modern-refurb and has several little touches to add character. I especially liked the cabinet with old Tetley bottles in it. We also reckon that once it warms up they’ll add a beer garden, since there’s plenty of space outside. 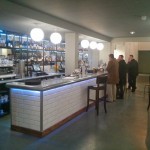 The bar menu is pretty extensive, offering sandwiches, salads, and other typical bar food, and the attached restaurant has an even wider selection of continental British cuisine. We’re also always excited to see a place that serves breakfast so we’ll definitely be visiting again for that. 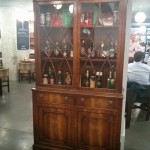 A relic of the past.

True to its name, you’ll find two Tetley’s casks here and Huntsman in bottles. The kegs serve a decent (though not terribly exciting) range of lagers including Mahou, Poretti and San Miguel, and there’s a handful of good crafts to choose from in the fridge. We were most excited about three varieties from Stevens Point, a new favourite brewery of ours. There’s also Brooklyn, Sierra Nevada, Goose Island and Duvel. 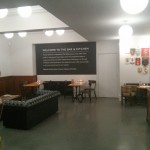 I think it’s all the white fluorescent light and white walls that make it feel a bit cold to me. But the sofas are lovely!

The Tetley has a little something for everyone — it could be a gathering place for after-work drinks or somewhere to come on your own with your laptop or a book. And obviously there’s an art gallery upstairs if you want to drink in a little culture along with your pint. It’s unclear whether the PSL’s lease with Carlsberg is for the next five or the next ten years, as sources vary. Either way, we hope it will prove regenerate a corner of Leeds’s industrial past into a cornerstone of its vibrant present and future.