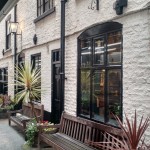 Still looks like an old pub from the outside.

In the 1880s, Leeds’s oldest pub The Turk’s Head changed its name to Whitelock’s and history was made. Now there’s another bar by the same name occupying the former function room, but it’s far from old.

For those who remember the top bar at Whitelock’s, The Turk’s Head is going to be a shock. It’s had a complete revamp into an ultra-modern tiles & upholstery experience with a theme of vials, jars and flasks that Emily calls “apothecary chic”. If we’d just walked in here for the first time we’d have been very impressed with how it looks, but we can’t help feeling more than a bit sad that the old bar – complete with all its original Victorian fittings – is gone, because it was beautiful in a way that we’re never going to get back. 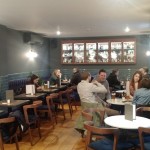 But on the inside it’s a complete top-to-bottom revamp!

The Turk’s Head is open to the public evenings and weekends, and is still a function room on weekday daytimes although I’m going to guess it’s probably not free of charge any more!

The bar (as with Whitelock’s next door) is owned by Ed ‘Five Points Brewery’ Mason and there are of course a handful of Five Points beers on offer. In total there are 12 kegs – look at the printed menu – and 2 casks (the casks were interesting ones from Brass Castle and Magic Rock when we visited). Prices are really expensive, especially considering the low prices next door, but not totally out of the ordinary for a craft beer bar in town. As well as beers there are many spirits and cocktails to choose from. 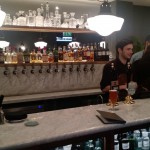 Some of the aforementioned apothecary chic!

The staff were exceptionally friendly and we felt very welcome and had we not had plans we might have stuck around for a few. There’s food available in the form of oh-so-fashionable small plates but also on a Sunday you can order a full roast dinner from next door to eat in the Turk’s Head.

And of course there’s also the huge and amazing beer garden outside which is now shared between the two establishments.

If we weren’t so sad about the demise of the room that used to be here, we’d probably give The Turk’s Head a glowing review. It’s achieving everything it sets out to achieve and I have absolutely no doubt it will be a huge success.