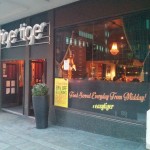 Tiger Tiger is named after the first line of one of William Blake’s Songs of Experience, but that’s where the comparison with 18th century romantic poetry ends.

This bar is the grand centrepiece of a whole nightlife subculture in Leeds that we have no experience of at all. Hundreds of people come here every night of the week dressed in their best clothes to dance, cavort and drink cocktails. On a Friday or Saturday it is so crowded with dancing drunken bodies that I can’t imagine even being able to move. 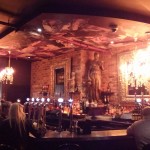 The Jewel Bar is too gaudy for my phone camera.

And it’s absolutely vast inside. There are 8 rooms here with 8 bars and 6 dancefloors. When we visited on a Monday several of the rooms were closed, including their Hawaiian tiki bar and the 70s-style disco with the light-up dancefloor. Oh well. One of the rooms is a bar and grill-style sit down restaurant with table service, which was something of a surprise! 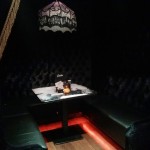 A new religion that’ll bring you to your knees: black velvet if you please.

The main “Jewel Bar” area is almost like a stereotype of gaud and glitz. There’s velvet everywhere and massive chandeliers. They’re trying very hard to be classy and I think they succeed, although you’re asking the wrong people about class. 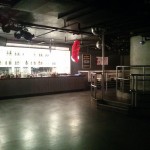 We sneaked through the door of the White Room for this pic. It’s white.

With Tiger Tiger being clearly a cocktail bar, we weren’t expecting very much in the way of beer and of course we were right. On keg the only passable drink is Guinness and in bottles the selection is equally terrible, with Peroni, Sol and Tiger being the best of a bad bunch. Prices are unbelievable for such beers (£4.30 a bottle) but all drinks are 50% off during their “happy hour” that runs until 9pm every day, which I suppose is some small consolation. 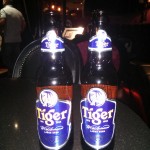 Ahahahaha see what I did there?

Of course, for people like us the main draw is the Lucky Voice karaoke bar at the back, well known for having a great selection of songs and state-of-the-art kit. Of course, you have to wade through a dance floor to get in and out, which may be offputting on a Saturday night.

And really, if you’re a beer lover and you aren’t up for karaoke tonight, stay far away from Tiger Tiger.