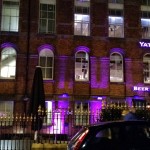 The beer terrace. The lights and loud music are compulsory.

Over 2 years ago we reviewed the city centre’s other Yates’s, and it’s fair to say we found it a very unpleasant experience. We’ve been holding off reviewing its sibling for fear of the same, but we were wrong. It’s actually OK in here! 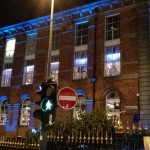 What was this building before? A chapel?

The pub is huge, split over two levels with bars on both floors. When we went in on a weekday afternoon it was busy but there was still plenty of space to sit. There’s also a beer terrace — unusual in this part of town — if you can stand the classic pop being piped at full volume outside. The décor is bland and chainy but it’s not offensive and the whole place is very well kept (especially by comparison with the other one). An especially nice surprise was power outlets at some of the tables. 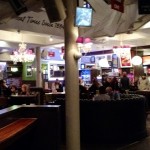 Beer-wise there are 4 casks, although only Greene King IPA (£1.99!) was actually on when we visited. Keg is nothing special (Guinness and bland lagers) but we spied a few classic craft beers in the fridge including Sierra Nevada, Brooklyn, Punk IPA, Goose Island, Curious IPA and the ever-awesome Einstök. We paid £5.50 for two decent bottles which is about as good as you can get anywhere in town. They only lose a star for value because the beer selection isn’t as wide as some of the other places we’ve been. 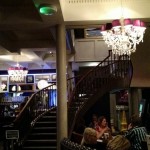 As well as beer there’s a full menu (including breakfast) of low-price pub food. The crowd is a mixed bag of students, arena-goers and bargain-seekers. I would probably avoid it late on a weekend (it stays open till 2 or 3am most days): I expect it attracts a pretty unsavoury crowd but there were no signs of this when we visited. 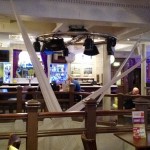 The improvement could be across the Yates’s board in the last two years, or it could just be that this one is much better than the one on Boar Lane. Either way, this is a decent enough cheapy chain pub, but that is all it is.