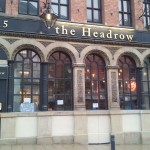 Replacing The Northern Monkey after its demise earlier this year, the imaginatively named 115 The Headrow is an attempt by Manchester’s unremarkable B-Lounge chain to make it over this side of the Pennines.

115 is immaculately decorated, with modern fixtures and fittings throughout — a big difference from the intentional shabbiness of its predecessor. There’s a huge neon 115 on the wall, which flickers every few seconds. We weren’t sure if this was by design, but it was a bit irritating. 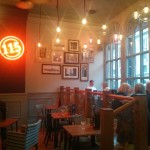 Food is a focus here, and there’s an OK menu with a slant towards Southern US cuisine. I guess they’re still getting their kitchen on board, because when we visited they “won’t have chicken until tomorrow”. Oh well.

Beer-wise the selection is very mediocre. Two cask ales, and they were Marston’s ESB and Castle Rock’s Harvest Pale: both pretty dull. There’s nothing on keg or in bottles to speak of. There was a half-decent whisk(e)y selection, but again nothing too special. 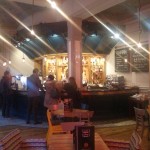 The bar. Look at how bar-like it is.

In fact, half-decent is the best way to describe 115. It doesn’t do anything badly, it just doesn’t have anything exciting that would make us want to come back. The beer, the food, the décor — all nice enough but completely uninteresting.

I’m sure being located on the Headrow opposite The Light it will cater well to that middle segment of the population who don’t need anything novel, just what they know. Unfortunately, for fans of the unusual like us, that’s just not enough.