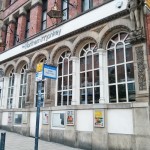 Walked past this place so many times, and now we’ve finally been in!

I lived in Manchester for many years, and walking through the door of The Northern Monkey is like being transported right back there. Something unusual about Leeds city centre is its lack of places like this. I don’t know how to describe it exactly – it’s the opposite of a hipster venue: firmly targeted at the largest drinking demographic while at the same time feeling perfectly welcoming to odd folk like us who wander in unexpectedly. 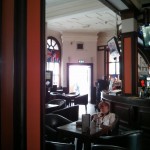 Action shot, taken into the light. Congratulations if you can make anything of it.

There’s a friendly landlord, there are TVs showing sports, there’s food all hours, there’s humorous ape-themed artwork, little signs digging at Manchester United and foreign sports teams, and there’s an internet jukebox which happily plays The Smiths and 90s Manchester tunes when left to its own devices (there’s a signed copy of Fools Gold on the wall!). It’s almost like a stereotype of a Northern pub. There’s also live music here regularly which is probably fun but also (I’m guessing) unbearably warm in the summer months. 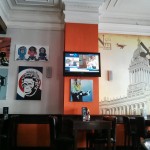 Some of the simian art adorning the walls.

The specialty here is burgers. They serve many many different kinds, and they are spectacular. This is now my new favourite place to get burgers in Leeds. I had the “breakfast” burger that comes with bacon, eggs, sausage and black pudding. What more can you ask for? When we visited the specials were in honour of The Ashes with a crazily English burger (with horseradish, of course!) and an Australian burger made from kangaroo… 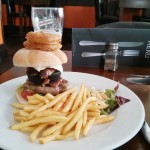 The amazing breakfast burger. I was congratulated for finishing it!

Sadly, the awesome menu does not extend to beer. If I told you that the best thing on offer was San Miguel you’d know what I mean. There’s also John Smith’s keg and Guinness as well as things like Bud. Yeah. It’s a shame, because even one decent bottled beer would allow us to give this place a rating it otherwise deserves but, as we keep saying… we are a beer blog!

If you’re after a burger and you can stomach the beer selection, The Northern Monkey is well worth checking out!