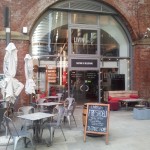 A spot of Mediterranean sunshine in the Dark Arches.

LIVIN’italy describes itself as the only “enoteca gastronomica” in the UK. This is a type of wine bar / restaurant / shop crossover common in Italy but rarely seen over here. Occupying just one of the Dark Arches, the bar makes really good use of the space. There are two floors, with tables and the deli downstairs, more tables upstairs along with a large lounge area. It’s not divided into eating and drinking areas, and people seemed to feel comfortable sitting anywhere whether they were there for a meal or a few glasses. 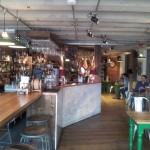 The specialty here is wine, and there’s a huge list to choose from. Regulars can even buy a prepay card and use a self-service wine dispenser near the door for popular wines by the glass! There’s also a massive cocktail menu. Of course, we were here for the beer. I’d had a tip that we were in for something special and LIVIN’italy didn’t disappoint. Along with the usual Eurolagers, there are three very special Italian craft beers available. Gradisca Lager, Open IPA and Isaac Blanche. The Open and Isaac are also available in 75cl bottles to share. They’re not cheap (£16 for the large bottle) but the Open was spectacular and a refreshing change from the typical wine with a meal. 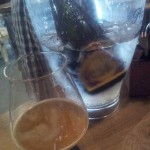 Beer in an ice bucket. Awesome!

The food was also spectacular and not overpriced. The menu is mostly simple Italian meat or pasta dishes, and they’re adding pizzas soon. As well as the eat-in menu, there’s a big deli downstairs selling fresh pasta, cheese and olives as well as ready-made meals to take home and heat up. And on weekends they have a breakfast menu until 4pm which is going on our weekend wishlist. 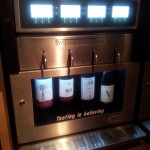 And the first time in our lives we’d seen a self-service wine dispenser!

LIVIN’italy also deserves a nod for the service. Everyone who served us was friendly, helpful and not at all overbearing. We felt really comfortable the whole time.

We probably wouldn’t ever make LIVIN’italy our local bar because they only have a handful of craft beers which are pretty pricy. But when the beer, the food and the atmosphere are this good it’s definitely somewhere to come back for special occasion after special occasion.