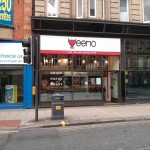 Look closely and you’ll see me drinking a glass of wine. Read on to find out why I chose wine.

As one might expect from the name, Veeno is a wine bar. Opened in August 2014, it’s in the style of an Italian enoteca. (Literally “wine library” and originally referring to a place where visitors can sample many different wines with a view to buying bottles, now this term more loosely refers to an Italian bistro-like bar that serves spuntini alongside the drinks.) Think Italy’s version of tapas.

Rich tries to decide which boring beer he wants.

With all the focus on grapes, the beer selection is unsurprisingly underwhelming. There’s Peroni and Pilsner Urquell on tap and Moretti, Budweiser, Corona and Beck’s in bottles. (Not the worst we’ve seen, but close.) We weren’t expecting much, and even though Veeno is a nice enough place, it definitely suffers as a result of this blog’s beer bias. 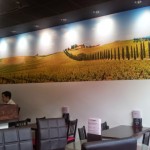 Ah… it’s almost like you’re actually in the middle of an Italian vineyard.

There’s a small seating area upstairs as well as a handful of tables downstairs, and the new-ness of it makes it all feel a bit sterile. And because it’s such a small space with a bar in the middle, it feels a bit panopticon-like. (We try to remain inconspicuous when doing reviews and it was a challenge here.) 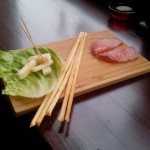 A sample of spuntini — complimentary with a drink between 5pm and 9pm.

It’s no LIVIN’Italy, that’s for sure, but it’s the only bar of its kind in this part of town so it might fill a niche nicely.