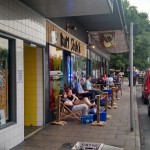 A new addition to one of our favourite streets in Leeds.

Let me say right up front, we really like what Rum Shack is doing. It’s not going to do well on paper for the Quest, because it’s definitely not trying to be a place with good beer. That’s not it’s purpose. But nonetheless, the concept is creative and well executed. 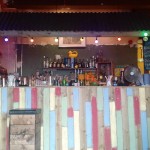 Doesn’t it already feel like you’re in the Caribbean?

Rum Shack is a pop-up bar occupying the space between Sandinista and Belgrave, brought to you by the Hedonist Project, an events and consultancy team with lots of experience serving up drinks in Leeds. It will be here until 5 September, 2015, at which point it will adopt a new incarnation with a new theme.

For now, the theme is rum. Lots of rum. They offer a huge range, tasting events, and £6 cocktails all featuring — you guessed it — rum. I had a “watermelon cooler” which was very tasty though a little heavy on the rum for my taste. (The pours are quite generous here, which isn’t necessarily a bad thing.) 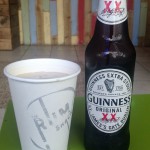 Top Tip: If your only choices are this and Red Stripe, get this.

They do offer two beers, thus qualifying it for a review at all, but it’s just Red Stripe and Guinness Original XX. At £4 a bottle they’re unfortunately not going to get high marks for value, either.

The place is all beach-themed and when we visited it was non-stop reggae music. The deck chairs in the small seating area outside are a nice touch. 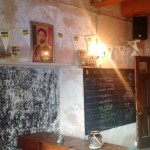 The decor is a bit hodge-podge but it works!

The guys are very friendly and welcoming and are definitely bringing something unique to the Leeds drinking scene. As I said, they’re not going to get a high score for beer, but if you’re a fan of rum and something different, that shouldn’t deter you from stopping by while you still can.