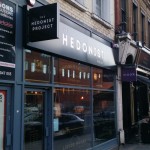 The former Wokon Noodles retains some of its glory in the exterior.

After the success of Rum Shack, The Hedonist Project is back with a permanent venue but a far-from-permanent concept. They’re going to change this space into a completely new bar every few months (this one is done on 27th March). Are we going to review them all? Time will tell.

The current offering is called Liquor & Whisky and it’s certainly got whisky covered with an amazing curated selection of single malt Scotch as well as a few bourbons. There’s a small beer selection featuring beers from Meantime, Fourpure, Northern Monk, Beavertown, Anchor and a couple of others (each of which is paired with a whisky on the menu if you want to have what I’ve learned is called a boilermaker). All of these beers are easily found elsewhere in Leeds but the selection is still quite varied and the beers they have are good ones. As well as boilermakers there are lots of other whisky cocktails available. 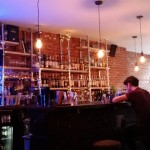 Whisky. Lots of it.

There’s a food menu that specializes in breakfast and does look very nice and coffee is served for those who aren’t looking to get wasted at breakfast time.

The décor is your usual hipster bar fare, which is certainly pleasant enough but claims of “zero pretension” might be pushing it. I did note the excellent soundtrack of chilled out (mostly) instrumental tunes.

Altogether, Liquor & Whisky is achieving what it sets out to do with a great curated selection of whiskies and exactly the right atmosphere for the people who want to drink them. But on the Beer Quest it was never going to get full marks. We’re looking forward to seeing what’s next!