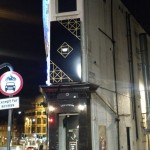 Like Henleys that stood here before it, or the instantly-doomed Mayaimi, Vice & Virtue can’t shake its past as a strip club, but unlike those two, it doesn’t want to.

Vice & Virtue is a new tiny cocktail bar which at first glance appears to be a swanky faux-speakeasy along the lines of The Maven, with low lighting and leather booths, but it also wears its former life proudly instead of trying to cover it up (the clue’s in the name!) – especially with the “stage” at the far end. 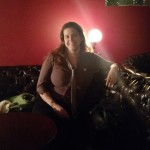 Here’s Emily in a swanky booth.

When we visited on a weeknight it was just us in there but we can imagine when the Northern Quarter is going full pelt it will be much busier.

The cocktails looked interesting and change often, but it’s beer we’re here for. We certainly weren’t expecting much, and the list was a pleasant surprise: as well as Guinness Porter and Leeds Best we saw beers from Cooper’s, Tickety Brew, Fordham’s and Northern Monk. Not bad! 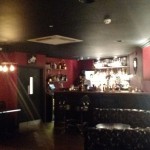 The staff were very friendly and welcoming and the whole place felt quite unpretentious and tongue-in-cheek when compared with its contemporaries which means it’s likely we’ll come back, especially if we’re looking for a cocktail instead of our usual beer!