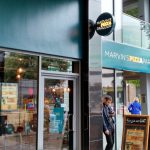 The clue’s in the name.

Marvin’s Pizza Parlour is the latest offering from the growing Leeds empire that includes the Roxy bars, Slate, Shed and Brooklyn, taking over from their previous venture LAB (Homage 2 Fromage).

Leeds is a big fan of the all-you-can-eat Brazilian barbecue (there are four in Leeds City Centre) and Marvin’s attempts to bring this experience to pizza. If you’re eating, you pay £12 (or £7 before 5pm) and you get a coloured card – green-side-up means more pizza for you. There’s also a tiny salad bar which is included in the price. 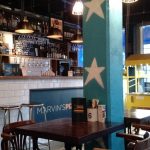 The bars (beer, and salad).

But even if you’re not eating, Marvin’s is a bar and so it qualifies for the Quest. And, surprisingly for a place that focusses on food, there’s quite a good beer selection here. 6 kegs including (when we visited) Brooklyn American Ale, Camden Hells and Ilkley’s excellent Alpha Beta IPA. In bottles there are more Ilkleys and Brooklyns to be had as well as 13 Guns and some beers we’ve never seen before like Devassa from Brazil. If you love really awful American beers, there’s PBR and Miller Genuine Draft to be had here. Prices are not extortionate but definitely not cheap either. 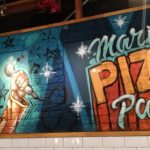 The building is the same as its predecessor, and just as large with plenty of seating on two floors, each floor with its own outdoor area.

The titular Marvin is Marvin Gaye, and everything in here has a Motown/R&B theme including the soundtrack, which could get monotonous if you spend a lot of time in here. The picture of a cheesy Marvin Gaye on the wall downstairs is a sight to behold. 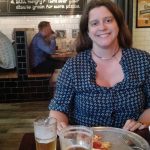 Emily doesn’t look full after all that pizza. Good thing more is on the way!

I don’t know what else to say about this place other than it was a very pleasant place to eat a lot of extremely cheesy pizza with some decent beer. We’ll be back if we want to stuff our faces with pizza (or dessert calzone – I kid you not) but probably not just for the beer.