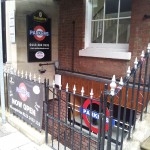 Picture taken the following day. You can hardly see the place at night.

Since we started writing Leeds Beer Quest a month ago, at least seven new pubs and bars have opened in Leeds city centre. Isn’t it our sacred duty to get the scoop on the new places?

Parkers is very new indeed. It still smells of DIY when you walk in. It’s spotless. The menu consists of two blank boards and the promise that food will be coming “in a week”. 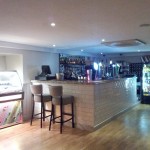 The bar area, including the jukebox.

This bar has just opened in a basement on Park Place, the soulless heart of the Financial Quarter, previously devoid of any kind of nightlife at all. It’s definitely trying to appeal to the financios, with champagne magnums dotted around decoratively, and the sleek, shiny interior. It’s carefully laid out to allow for comfortable seating of large groups (something very much amiss in this part of town until now, bizarrely) and the beer selection is mostly eurolagers (including some acceptable ones: Kozel & Urquell). 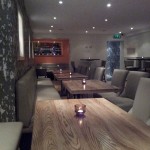 So business hasn’t picked up yet. I hope that changes!

Trying as it might to appeal to suits, this place does seem to have a spirit that can’t be crushed. There is a giant classic-style retro jukebox packed with complete albums that do include cheese alongside some better stuff: Britpop and modern North American indie. Also, there are a couple of real ales available. OK, they’re Landlord and Black Sheep Best but hey, that’s better than no ale!

Parkers was never going to score highly in our star ratings because it’s not our sort of bar. But this is a part of town that desperately needs any sort of bar, and frankly Parkers is a very welcome addition that could easily become a regular haunt for drinkers who work in the vicinity (like me!)