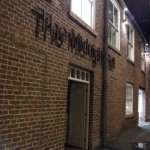 The Midnight Bell is a piece of history: it occupies part of the Round Foundry, where Matthew Murray built the first ever commercially viable steam locomotive. The restoration is tasteful, if a little bland. Even though the pub is only a fraction of the original building, it’s still very large and has a huge beer garden at the back. 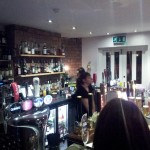 I reached over the teeming masses to get this action shot of the bar.

This is Leeds Brewery’s flagship pub, and their premium mild is named for it. Consequently, you get a great selection of their beers and others. When we visited they had five Leeds ales and one guest, as well as a limited but great bottle selection (including Little Creatures, Goose Island, Chimay Red and Leeds’s own ginger ale Hellfire). The lager selection is good too, including Leeds’s own Leodis.

Where The Midnight Bell really excels is in its food — they serve modern, but unfussy, pub cuisine that’s very reasonably priced and there’s a dedicated dining space upstairs to enjoy it in. The menu of homemade ice creams is something they’re very proud of, with some crazy flavours like rose petal and tonka bean. 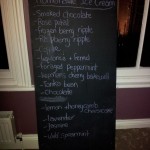 The list of ice cream flavours. Something for everyone. (Except me, because I can’t eat ice cream.)

The downsides: it’s cursed by being only one of two pubs on a very popular street, and is always really busy any time we go. Getting served at the bar can take a very long time, and this is not helped by the staff, who are not exactly known for their high quality of service.

That said, we often find ourselves returning to The Midnight Bell. The food, beer and prices keep it high on our list!