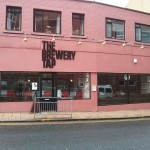 It’s pink. And I could swear it used to be green.

Although The Midnight Bell is their original flagship, when most people think of Leeds Brewery they think of The Brewery Tap. It’s right next door to the station and part of a little run of independents that also features Laynes Espresso and Friends of Ham. 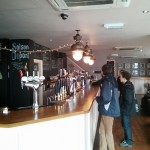 The bar. Look at all those casks and kegs!

The Brewery Tap is the place to try old classics and new experiments from Leeds Brewery. There are 8 different cask ales and one cask cider, with about 50/50 split between their own and other local beers. There are also 12 kegs, including Leodis lager. We’re starting to see Leodis all over the place, but this is the only pub that actually houses the brewery for Leodis lager upstairs! The other kegs are from all over the world, and there are some great bottles in the fridge including Sierra Nevada Torpedo, Odell’s wheat beer, Dale’s Pale, Hop Ottin’ IPA and several from Redwillow. 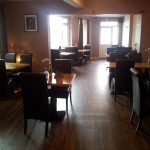 The highlight of the month here is the brewery takeover. On the last Thursday of every month, a local brewery takes over many of the casks and kegs for one night only. They started with Yorkshire brewers but they’re starting to include people from further afield now too. 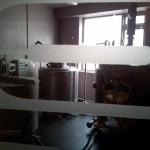 Downstairs is quite small and can get very very crowded after work, probably due to its proximity to the station. If no one has hired it, there’s also a big dining room upstairs that can take the pressure off if you can reach the stairs. When it’s not busy it’s actually a very pleasant place to have a quiet drink.

Food is served and it’s a typical Leeds Brewery menu (look out for the black pudding and bacon salad!) but other than that, the main reason you’d come here is for the beer. And that’s reason enough.