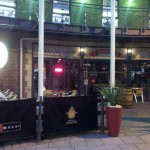 The massive beer garden opens out onto Brewery Place.

Azúcar is a joint venture between nearby Oracle and Kirkstall’s Viva Cuba, with a “creative edge” added by legendary smuggler/author Howard Marks aka Mr Nice. No, I’m serious.

With such a mix of input it would be easy for this place to have a split identity, and that’s exactly what has happened. Azúcar is part bar, part club and part Latin American restaurant. The restaurant area is at the back, but we found we were welcome to eat from the same menu in the bar.

It’s really dark inside – I was actually worried it was closed, but a neon “open” sign assured me otherwise. I know my phone camera is hardly great but even on the brightest exposure I couldn’t capture anything. It might be nicer in the summer when you can sit in the large beer garden at the front.

The bar specialises in cocktails made with rum/tequila and many types of sangria, so it’s no surprise that the beer selection isn’t great. That said, there’s a good mix of Iberian & Latin American staples including Alhambra, Mahou and Super Bock. The only beer on tap is San Miguel. The beer’s not horrendously expensive but it’s also not cheap for what it is. 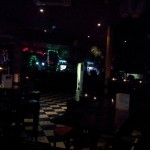 This was the best I could do for a photo inside. SO DARK!

The food seems to be the main draw here, and the restaurant area was packed on a Friday night when we visited. There are mains like burritos and fajitas as well as a tapas menu. We don’t usually review food on here but the chorizo was amazing.

From what we could see in the darkness, the décor is pretty eclectic. There was a TV showing an old western with subtitles and, even more bizarrely, a hymn board on one wall – maybe we should come back on a Sunday to see what that’s used for! There are lots of events here, also… mostly club nights but also some live music and an occasional quiz hosted by Mr Nice himself.

It is obvious to us why Azúcar is so popular, and it’s not only due to Howard Marks. They’ve got just the right mix to attract people who like food, dancing & cocktails. I think if it wasn’t so dark and there were some nicer beers on the menu it might have got us too.