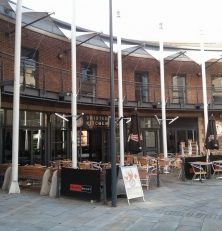 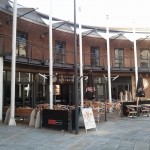 The beer garden is shared with Azúcar.

Twisted Kitchen is a new bar and restaurant in Brewery Place, squeezed between Oracle and Azúcar. Its website touts it as serving Midwestern-style food, although the menu is actually all food associated with the Atlantic South (Emily should know, she is from the Midwest — they don’t have crabs up there, let alone crabcakes!).

The space is huge, with a main bar area and then booths in an arc with riverside views of the Aire. It’s pretty scenic, although the TVs everywhere (showing DVD menus, mostly) are quite a distraction. 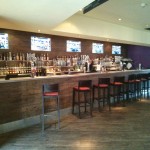 The bar. Those are a lot of TVs.

It’s table service here, which is probably its biggest weakness as the staff are surprisingly unsure about how to serve customers. One would think it’s pretty obvious not to take one’s break immediately after saying you’ll get someone’s bill without telling anyone else, but apparently not. Oh well, we’re here to talk about beer.

The beer selection is not bad, although it’s also not good. There are lots of shitty American beers (4 types of Budweiser!) but if you’re after decent stuff you’re limited to Brooklyn, Goose Island IPA or Anchor Steam in bottles, and Sam Adams and Blue Moon on draught. 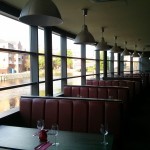 Terrible photo of the booths, but you get the idea.

The menu also includes a huge cocktail selection and maybe this is Twisted’s main pull. The food was pretty good when we visited, although we’ve heard mixed reviews.

Twisted Kitchen was exceptionally quiet when we visited on a Tuesday night, and this is very noticeable in such a large space. It’s a really pretty location with a handful of good ideas, but we left feeling like this was a first outing for wannabe restaurateurs who haven’t realized that making a mark in Leeds needs a niche. We wish them luck but, if we’re honest, they need it.